The History of Brother Shuckers

From Taste Magazine; BY BARRY KAUFMAN • PHOTOS BY ROB KAUFMAN

Shuck and Awe...How brothers Tommy and John Mollica give Hilton Head Island what it didn’t know it always needed.

How brothers Tommy and John Mollica give Hilton Head Island what it didn’t know it always needed.

Hilton Head Island was not the first stop for Tommy and John Mollica. Starting out in their dad’s Philadelphia restaurant, the brothers developed a flair for hospitality that took them around the country. On their own, they honed their skills in the front and back of the house. As a duo, they did everything from opening up Toledo’s Hollywood Casino together to running a blues bar in Fort Lauderdale.

The island wasn’t their first stop, but they’re here for the duration. “When my brother said, ‘Let’s open a bar,’ I just responded, ‘Well I’m retired,’” said John. “but I’m not dead yet.”

The brothers were getting the band back together, but the question still remained where they would choose for the magnum opus of their hospitality careers.

“We looked everywhere,” said Tommy. “I knew I didn’t want to go back to the Florida Keys. We were looking everywhere from Clearwater up to Charleston. It was my brother who found this place.”

“I spent months looking with realtors,” said John. “Charleston was on the list for a while, but everywhere you looked it was bar, restaurant, bar, restaurant… If we did this there it would be a six-month flash in the pan. That’s not what we were looking to do.”

“We really built this to be a part of the community,” said Tommy.

Becoming part of the community meant looking around the island and seeing what needs were going unfulfilled. While Hilton Head Island’s culinary scene may lack the notoriety of Charleston’s, we definitely punch above our weight when it comes to variety. Nonetheless, the brothers quickly found a huge gap in our collective menu.

“We had a couple of ideas, but when we went around the island, we didn’t see anybody doing a traditional raw bar where the shucker comes right out and shucks them in front of you,” said Tommy. “We do a fair amount of oysters and people love to see that presentation in front of them… We thought we found a little niche that wasn’t being filled and the response from locals has been overwhelming and humbling.”

The raw bar anchors the menu at Brother Shucker’s, but what truly sets it apart is everything else they offer. You expect to see other seafood items at a raw bar. You definitely don’t expect to see Jasmine rice bowls, bone marrow & smoked pork belly and bison burgers.

“I wouldn’t call it eclectic, but it pushes the envelope a little bit. We wanted a onepage menu, but we wanted a thorough one-page menu,” said Tommy. “If you don’t find something on that menu you like, I don’t think you’re hungry.” 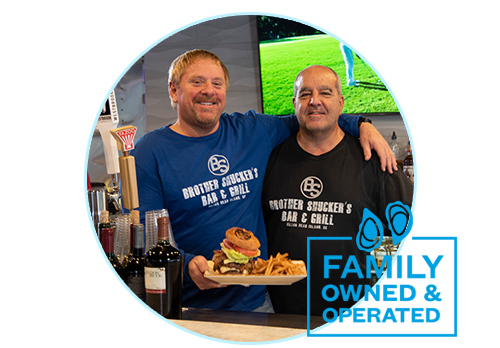 It’s an inspired mix of different culinary styles, one that manages to both offer something for everyone while sneaking in a few surprises that you might not find yourself ordering otherwise. And underneath the blend of pub fare, seafood dishes and fusion entrees is a subtext that speaks to Brother Shuckers’ core philosophy: do everything for the locals.

You’ll find oysters from around the world sharing space with oysters that were anchored in Broad Creek just a few hours prior, delivered by local oystermen. You’ll find breads, pitas and buns from local bakeries on the Island.

“We do everything as local as we can,” said Tommy.

That goes beyond the menu. From the beginning, the Mollica brothers knew that the key to the appeal of Brother Shucker’s was going to be catering to locals. To give the F&B crowd a place to call their own, they kept the kitchen going until midnight. They opened up the outdoor space to serve as a live music venue, drawing in the likes of Groove Town Assault, Chris Stevers and Bobby Lee and the Magpies.

“We’re more than a raw bar. We’re a fun place to come and have a good time,” said Tommy. “We take what we do seriously, but not ourselves.”

The locals responded in kind, quickly growing into a loyal following. The appeal is multi-faceted. The contemporary décor, defined by wave walls, quartzite counters and an electric blue color scheme, might mark Brother Shucker’s as a sophisticated enclave for the “little black dress” crowd. The anything-goes vibe, defined by the raucous live music and party atmosphere, might lead you to think it was the kind of hotspot where fuzzy late-night memories are made.

Both impressions are correct.

“This is a place you can come to in a cocktail dress or in flip-flops and you’re going to have fun,” said Tommy. “We’re a good-time bar. And we do oysters, but we do way more than oysters."

Eight days a week! We got your early and we gotcha late. come on over and enjoy. we’d love to have you

Get the news on Hilton Head's Live Music, Trivia, & All Events!